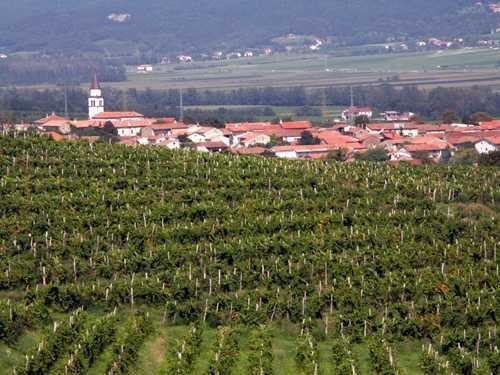 Kulturna dediščina
Slap, 5271 Vipava
The village is reached by a road that leads over a stone bridge over the Močilnik stream. The bridge was built by master builder Anton Trošt in 1803 and features a memorial plaque inscribed in Bohoričička.
The village of Slap is 141m above sea level and the Slapenski brook flows through the village, emptying into the Močilnik, which forms a waterfall in Klopovščak, after which the village is named.
There is a church dedicated to St. Matthias, built in 1765, according to Fr. Schumi, even earlier, as we can see from the crosses carved in stone by the Knights of Malta, who settled on the Slap in 1230 and built Slapen Castle, as the inscription on the castle gate shows.The castle was also owned by the Zwegkhenburgs, the Flachenfelds, the Coronini-Crombergs, and finally by the Lanthieri.In addition to the church, the Knights probably built a church, but it was later destroyed by the Turks.
The locals are particularly proud of the fact that the first Slovenian wine and fruit growing school was located in Slap during the Carniola period. It was located on an estate that was given free of charge to the Land by the then owner, Count Karol Lanthieri
Slap is well known for the carefully tended vineyards to the south and west of the village: Valvasor wrote about the delicious tears of the vines produced here in his famous Slava vojvodine Kranjske.
Fotogalerija

Vipava Experience: become a winemaker for a day

With Vertovec to the birthplace of the Slovenian national anthem

Life once upon a time